This is an active WIP post. It will get updated as I work through things.

If you missed my previous post, I detail the current State of the Union at Aver where we have over 18 distinct AngularJS 1.6 Single Page Web Applications which make up a single product/site.

UPDATE: Since starting this process, It has been announced that AngularJS development was being sunset and no new feature development would happen. This further pushes me toward migrating to more modern front-end framework and getting us off of AngularJS.

With Us having so many AngularJS applications, and AngularJS 1.6 feeling pretty dated at this point, it's got me thinking..

So... I'm in the midst of experimenting with moving from AngularJS@1.6 to ReactJS. By that, I don't mean migrating all of our front-end-micro-services and apps over, but rather coming up with a strategy where our legacy AngularJS apps live side-by-side with the newer ReactJS apps. The plan is that we are able to re-use as much shared code as possible with minimal re-write and in the end, our Users won't be able to tell the difference, except faster page load times!

I have 2 paths I'm currently working on in parallel:

I have to say, both paths are going swimingly so far!

Here are the libraries and parts involved:

There's still so much to do and figure out before this app will achieve parity compared to the features and services that our AngularJS seed app offers but it's well on it's way and the basic application structure is in place.

This will grow and get more complicated as I go, but for now that's what I've got.

Alongside path 1, I've been also looking into writing React components that could plug right into the AngularJS Apps. This will be super important as part of the migration. For instance when I get the header completely re-written in React, I'm not going to want to try and maintain 2 different headers simultaneously. Instead I could re-write it in react and then implement that single React header in both the React & AngularJS Apps. This would allow me to delete the old AngularJS-only version.

Following this idea I was able to pretty quickly replace an old AngularJS page with a ReactComponent page and I'll show that here.

Here's what the original page definition file structure looked like. 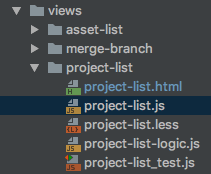 The files are described as follows:

Here's roughly what the controller looked like prior to the re-write. This is just an AngularJS Module definition with a config function that sets up a route to a new controller definition:

And here's where I'm at now. I knew I'd need to keep some of the Angular parts of this, such as the angular route definition so I started there.

ProjectList.js - The replacement top-level piece which connects my React component into AngularJS.

ProjectListLi.js - Each LI representing a project

The real magic here to take note of is the react2angular portion of things. It allows me to create an Angular component which is really a ReactJS component and more importantly it allows me to inject angular services into the react component which end up as properties on this.props. This was great for being able to call and re-use all of my existing AngularJS code including the logic file that I was using on the legacy version of the page.

I plan on taking this idea and building on it to allow me to write react apps on top of our AngularJS Seed app that we already have. This will allow me to get the all rolling on React before Step1 from above is completed.

I'll be trying to keep this page updated with any notes or fun stuff I find along the way and document the progress along the way.

Preface Currently, I am the Front-End Engineer on our development team. My job, outside of developing much of the front-end portion of our new product development, is to focus on overall Front-End architecture

I was randomly taking a look at our webpack stats visualizations and I saw something that really caught my eye. For one, our app.bundle.js code had jumped quite a bit in

The Personal Blog of Corey Snyder
—
It has begun! Moving from Angular 1.6 to ReactJS
Share this